Hey there, fellow Catz! Today I want to talk about one of many possible late game builds in ZpellCatz: A Fury Shaman that is focused on "Lightning Totem".

Since the playable demo / prologue features some early gameplay, I thought it might be a good idea to show how late game builds could look like in ZpellCatz. We'll start with a Fury Shaman because it's the class combination that's playable in the demo / prologue.

In this build, we want to focus on the skill "Lightning Totem". Lets make it super strong! :-D 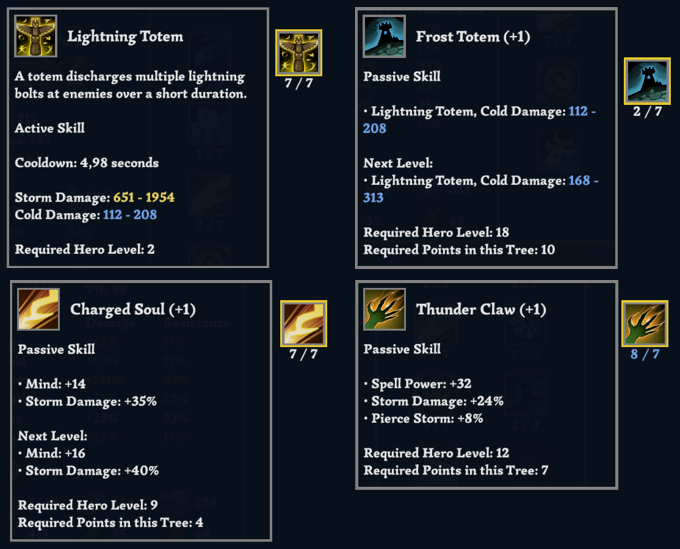 We choose "Master of Totems" as the ultimate skill because it's a perfect match for our build. Ultimate skills provide some really great bonuses, but you can only select one of three (two based on the hero class and one based on the selected path). The three skills at the bottom of the skill window with an orange border around the icon, those are the ultimates. 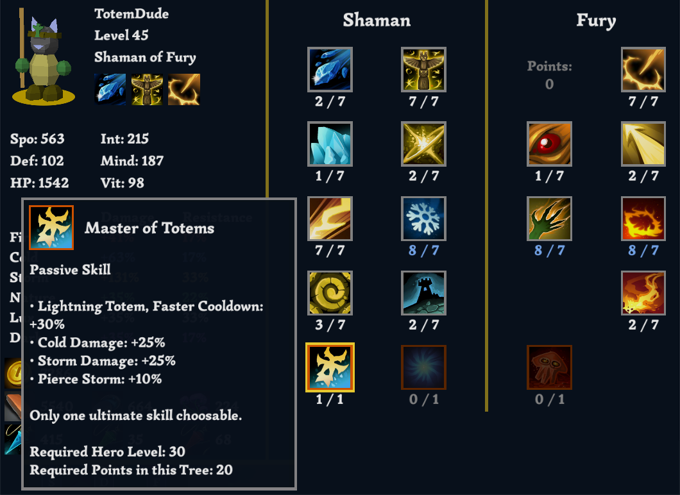 Although the following abilities don't directly support our totem, we put points in "Chill" ("Ice Missiles" slows and weakens enemies), "Shock Nova" (active skill) and "Ring of Flames" (fire base damage to "Shock Nova"). We'll see in a moment why they are great for this build. In addition, I like to distribute 1 skill point in every skill in order to receive skill point bonuses from items / gems. 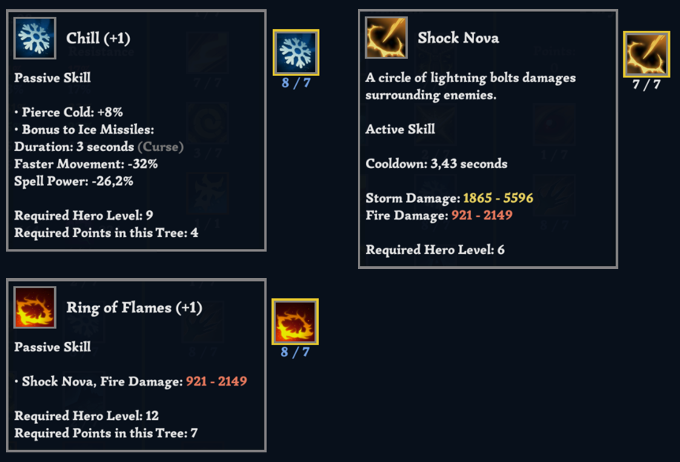 A nice mix of tier 2 and tier 3 epic items is waiting for us. Lets start with the weapon: "Moonlight of Agony" (tier 2, not craftable). It grants lots of bonuses that directly support our build, especially the "Lightning Totem" cooldown reduction and the epic effect that increases the number of shots from 5 to 7. 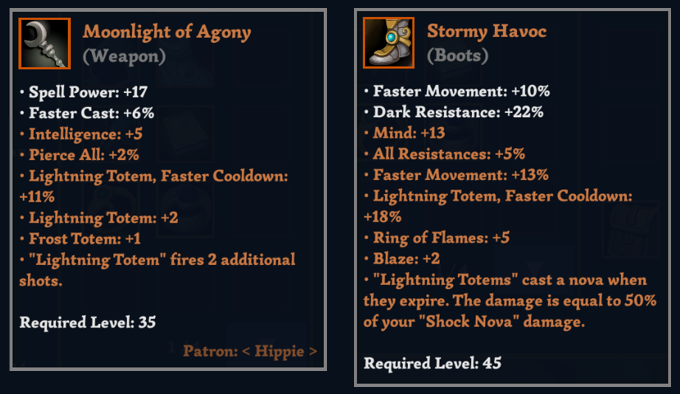 For the boots slot, we choose "Stormy Havoc". It's a powerful tier 3 item designed for Fury Shamans that combines the skills "Lightning Totem" and "Shock Nova". Remember that we've put points in the skill "Shock Nova"? With this item, our totems also cast it when they expire. Very helpful!

Our build is focused on offensive totem combat, but we don't want to create a glass cannon here. So lets pick 2 items that form a good symbiosis: "Cold Warden" (tier 2 helm, craftable) and "Guardian of Aeons" (tier 3 body armor). "Cold Warden" helps spreading the effect of "Chill" with our totems, so more enemies are slowed and weakened. In addition to this, "Guardian of Aeons" provides damage reduction based on the number of enemies cursed by "Chill". Also, both items provide nice healing stats and skill bonuses. 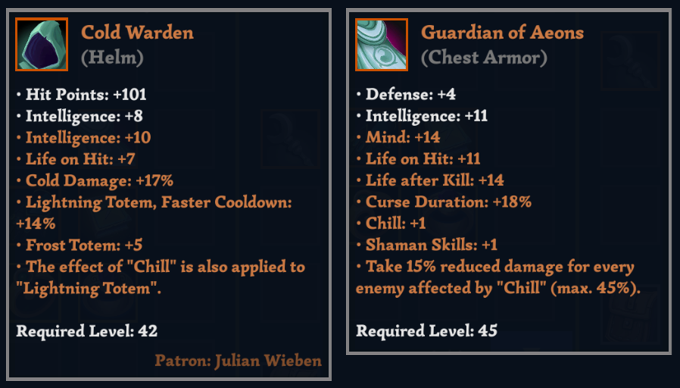 Now it's time for conversion gloves! The item "Thunder Grip" (tier 3 gloves) converts cold and fire damage to storm damage. Since cold, fire and storm are the only possible damage types for a Fury Shaman, all of our damage dealt is now storm damage. This is great, because it's very easy for Fury Shamans to increase storm damage. The drawback, however, is that enemies with very high storm resistance (max. is 95%) can be hard to kill. Luckily, we have a lot "pierce storm" provided by our skills and items. This stat reduces enemies' resistances before dealing damage. So with about 30% pierce storm, enemies with high storm resistance will take some more hits, but they shouldn't be a problem anymore. 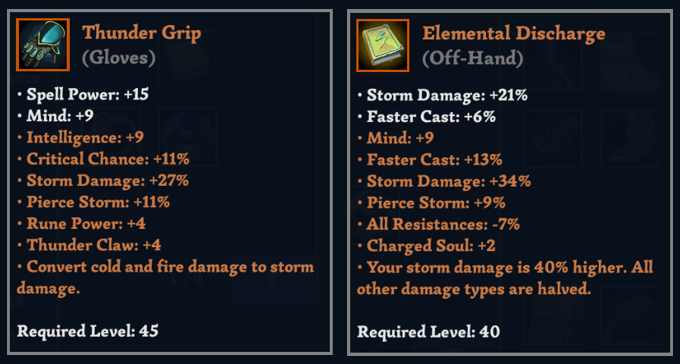 For the offhand slot we choose "Elemental Discharge" (tier 2 book, craftable). The item increases storm damage a lot, but reduces all resistances and all non-storm damage dealt. This might be a bad choice for other builds, but it is a really great item for this one. Since we only deal storm damage thanks to "Thunder Grip", we receive a 40% total damage bonus.

Our items are offensive enough, lets take some resistance boosting rings for the jewelry slots. You wonder why we take rare rings instead of epic ones? The answer is simple: there is no epic jewelry (rings, amulets) in ZpellCatz. I talked about that some time ago in an article about itemization.

We pick gems that help us survive (boost all res or single resistances that we're lacking) or ones that directly support our build (storm damage, skill bonuses). I won't describe each gem in detail, but here are some examples of gems that I found useful for this build: 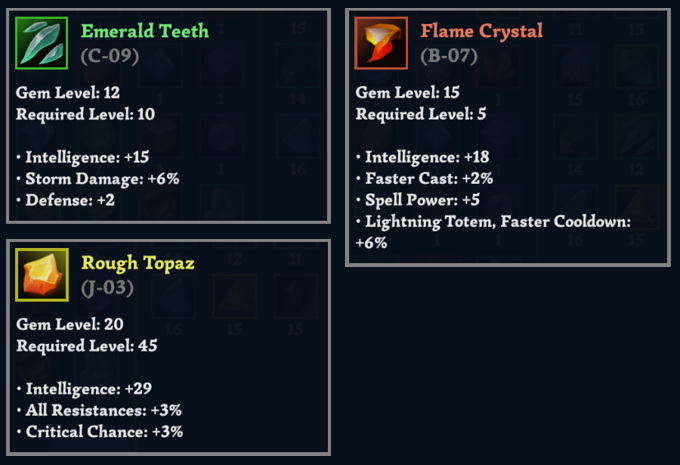 So, with all items and gems equipped, our final builds looks like this:

All important skills are level 10-14 and we've got 260% storm damage. The cooldown of our totem has been reduced from 7 seconds to 3.5 seconds, it deals 5k - 12k damage per shot and it releases a nova (with 50% power) that deals 7k - 18k aoe damage. You don't need damage numbers that high for the normal story content, but there will be challenging late game dungeons in ZpellCatz for those of you who really like to max out every aspect of a build.

But just for the fun of it, lets watch a totem clear a room in one of the later story content dungeons... :-D

I hope you enjoy this build as much as I do. I'll share more builds for other class combinations soon to give you further impressions of how the late game of ZpellCatz could look like.

Note: All info here is in development content and subject to change.

There is a Kickstarter campaign currently running for ZpellCatz. Check it out here: https://www.kickstarter.com/projects/sima/zpellcatz-magical-action-rpg-with-cats